Decoding the Queen’s Green: Why She Wore What She did for the big Birthday bash

In case you missed it, the Queen turned 90 and there was a huge party in her honor last Saturday. Even if you aren’t an Anglo-maniac, the news of Queen Elizabeth’s celebration parade and activities have probably found their way into your daily life. I have reason to believe this, because I am literally half way around the globe in Southern Thailand and have still managed to see it in newspapers and online. People seem to love a good parade regardless of their native culture. You know what else people love? Who wore what. And this is especially true when it comes to the Royal family. Don’t believe me? Just visit the site WhatKateWore.com to see basically every outfit the Duchess of Cambridge has ever worn in public.

While most people are usually crooning to see what the Duchess is donning, this past Saturday’s event had all fashion eyes on the Queen. This may have been because she was sporting her typical coat and hat ensemble in a very atypical color (or should I say, colour): neon green. The article I was reading from Thailand’s Newspaper The Nation described it ever so hilariously by saying, “But it was the queen’s unusually bold dress and hat combination in a green so bright as to be almost fluorescent which caught the eye of many.” 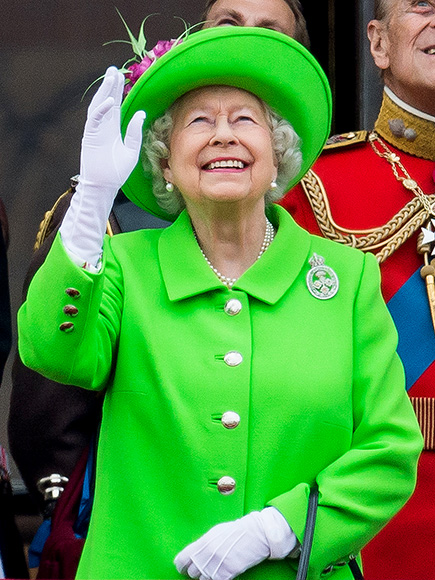 You wouldn’t pick out just anything from your closet for your big 90th birthday celebration, and neither would the Queen. She picks out every ensemble with Anna Wintour-esque pre-meditation and this bright number is no different. Here are a few theories as to why stop light green made the final cut.

Or, maybe I’m over analyzing it all and green just happens to be the Queen’s favorite color. Either way, she looked great.